I've never been able to explain what Power Pop is.  I've always found it hard to describe the one of my favourite genres of music, instead I'd just play "No Matter What" by Badfinger or "See The Light" by The Flame and say "That's Power Pop!"  Well, I was reading the Bomp: Saving The World One Record At A Time book the other week and Greg Shaw explains it a million times better than I could ever dream of, tracing it's history via Mod in the UK and Garage Punk in the US and heaping the praise on one of the ultimate bands of the genre, the Raspberries.

Originally printed in Bomp magazine, February 1978, take it away Greg... 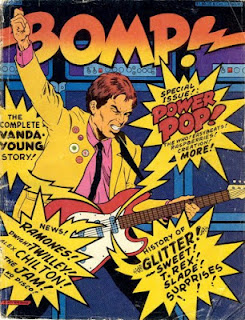 Powerpop (or Mod-rock as it was once called) thus began with the Who and was in fact pretty much a British phenomenon all the way.  Australia was a strong outpost with the Easybeats, Masters Apprentices and others, and with the Tages in Sweden, the Wizards in Norway etc, it had it's exponents everywhere. But as a movement we need look no further than London's West End for the core.

Most youths of 64-65 had a sound we'd call more-or-less Powerpop. The Small Faces, Eyes, Sorrows, even the Troggs and somewhat later, when Mod emerged for a magical moment with flower power, a second peak period that gave us the Smoke, Jason Crest, Wimple Winch, the Attack, the Syn, the Move, the Idle Race, Johns Children, the Herd and the band that has become one of the legendary names, Creation. Another Shel Talmy production, they had only a few first rate songs, but those were the epitome of Powerpop.

In America, without the social force of youth culture behind it, Mod music was heard out of context and never much of an influence except among those dedicated bands who read the British papers and longed to be Mods themselves (not unlike American punk fans today - Mod was after all the social and cultural equivalent of the current punk scene, if we care to draw that parallel ). The American reaction to British rock was first-wave punk rock, a style better suited to conditions here, although a number of would-be Mod bands came in with a punk scene. Groups like the Litter, the Ugly Ducklings, the British Modbeats, the Choir, the Clefs of Lavender Hill, Chessman Square and to promote Mod aesthetic in their mostly Midwestern locales, but since none managed to bring home a national hit record, they were lost in the ongoing mayhem of the times.

By the late 60's, the pop climate that supported Mod had disintegrated. Powerful guitar music  was confined to hard rock and both the trend-setting audiences and the musicians they produced lost all respect for pop as a result of the 'underground' movement. The result was that pop and rock went their separate ways. This divorce was doubly tragic: rock lost it's magic and pop lost the force of youth culture that had made it exciting. Pop music was now a studio product; at its best, with American bubblegum (Tommy James, et al) and British art-pop (Flowerpot Men, etc) it was marvelous stuff that the fans weaned on mid-60's mania often preferred to the formless, excessive rock that was the alternative. But the bands behind these records rarely even existed outside the studio and in most cases it was producers who proved the creative force, with musicians existing in its own artistic vacuum. Teen anthems were out of the question. 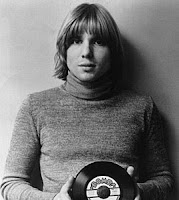 It's singularly important, in attempting to follow the thread of Powerpop over the years, that we clearly distinguish it from its closely related form, pop-rock. Pop-rock goes back to the Zombies, Hollies, Searchers, etc and while these groups often ventured into hard rock, the foundation is pure pop and the sphere of pop-rock encompasses all varieties of soft rock stretching back to the blandest inanities of Gilbert O'Sullivan or Hamilton, Joe Frank etc.

Since pop-rock is by nature commercial, it's always been around and in the hands of this or that exceptional group, sometimes approached the splendor of Powerpop. There was a period in the early 70's when so many musicians turned against the vapidity of mainstream rock that it seemed a kind of spontaneous Pop Revival was taking place. We had a wealth of records that were, if not Powerpop, the certainly powerful pop-rock: "Do Ya", "Tonight", "Chinatown" by the Move, "Baby Blue" and others by Badfinger, "Love is in Motion" and "Darling" by Stories,  "Rendezvous" by the Hudson Brothers, "September Gurls" by Big Star, "Long Cool Woman" by the Hollies, "Good Grief Christina" by Chicory Tip, "Tennessee Woman" by the Nashville Teens, "Some Sing, Some Dance" by Pagliaro, "Orbit" by Thundermug, "Natural Man", by Marcus Hook, records by Blue Ash, Circus, Pony, Vance Or Towers and dozens more.  All of them great, some classic hard-rocking pop records.

The only problem was these records either became hits and sold to the AM radio masses, or more often they stiffed and were never heard. The groups themselves rarely had local audience support and the worldwide cult audience wasn't yet sufficiently organized to give them foundation and inpsiration for continued effort.

The one Pop Revival band that could really have done it was the Raspberries. What a perfect band! Their roots went back to bands like the Choir and Cyrus Erie who'd been championing mod music since 1965.

Their first four records were smash teen hits, entrenching the Raspberries in AM radio and the teen mags. They were beloved by the press and the cult rock audience of the time, even if neither of these factions was then potent enough to give more than encouragement. Most of all, they made the best damn records I'd heard since 1967.

The Raspberries were the essence of Powerpop, more than the Who or any of their prototypes. On their best records, every nuance, every tiny bit was flawlessly designed to create an overall impact that's never been matched. The reason: Eric Carmen had studies and distilled into the group everything that was great in his personal idols, not just the Who but the Beatles, Lesley Gore, the Beach Boys, Tommy James and more. Records Like "Go All The Way", "Tonight", "Ecstacy", "I Wanna Be With You" and "Let's Pretend" illustrate the Powerpop ideal: pop beyond question, dealing with themes of innocence and teenage romance, without schmaltz, with the power of pure rock & roll giving force to the emotions being conveyed. All the dreams and frustrations and urgent desires of teenage emotion are captured in those records as never before or since.

Whatever the reasons they didn't, if the Raspberries had become phenomenally big, who's to say what might've followed in their wake. They represented a growing movement that needed only a catalyst to take off. In Cleveland and other Midwestern cities, whole echelons of similarly-minded bands were working the club circuits, many issuing private records in anticipation of the New Wave, with the support of local press and radio. The possibilities of Cleveland as a "New Liverpool" were, for a time, very real.

The spirit of Powerpop lived in the Pop Revival and was exalted in the music of the Raspberries. Meanwhile, back in England where its genesis lay, it had taken different shape in the Glitter trend. Suffice to say that the form and a great deal of the sound by which we identify Powerpop were successfully recreated in the laboratories of producers like Chinn & Chapman, Phil Wainman, Mickie Most and with a more than implicit nod to Mod (Bowie's Pinups) along with the refreshing outburst of teen mania that accompanied the doings of all these acts,  the exposion of records and teen magazines and all the rest, it looked on the surface that it was "all coming back" at last.

There were two things wrong, however. First , America was having none of it. Too many damaged brains still preferred boogie bludgeoning to pop power, and the pop spirit of the time was grafted onto the same old music with the glittery costumes of Edgar Winter et al. Most of the best glitter bands stiffed completely in the US and this fact proved fatal to the movement. Equally fatal was the fact that this music, still, belonged to the producers and and string-pullers. It was no real movement at all, but an artificially created trend exactly analogous to the Kasanetz-Katz era of bubblegum. The musicians had no roots in their audience and the audience itself had no identity or pop culture of its own from which to produce musicians. Glitter fashion consisted of elaborate, expensive stage costumes. Nothing a kid could improvise or create.

The thrust of glitter was in the right direction and most of the records, as pieces of plastic, stand on their own, but without the connection to a healthy pop culture, it wasn't Powerpop in the sense we aspire to.


Excerpt taken from Bomp: Saving The World One Record At A Time by Suzy Shaw and Mick Farren. Available to buy here.
Posted by Peter Gough at 21:01