When the Bonzo Dog Band split in January 1970, songwriter Neil Innes had his sights set on commercial success, something that the Bonzo's had briefly come by with their only hit, the Innes penned and Paul McCartney produced, "I'm The Urban Spaceman". Innes had already written some "proper" songs, in particular, one tucked away on the Keynsham album, "I Want To Be With You" in which Innes pulls off an attempt into mainstream pop/rock, sounding a lot like Badfinger in the process. 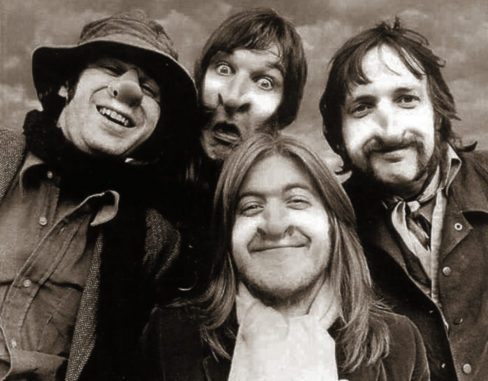 Neil Innes enlisted former Bonzo, Dennis Cowan (bass, guitar, vocals) and Ian Wallace (drums, vocals) and Roger McKew (lead guitar) to form The World. Their sole album, "Lucky Planet" was recorded at Trident Studios in August 1970, written and produced by Innes. The music on the album is a fine example of 1970's Beatles influenced proto-power pop which is highlighted in "Not The First Time" and "Sail Away", both of which could be passed off as Pete Ham penned Badfinger out-takes. By the time of the album's release in late 1970, The World had already split, but Innes hadn't given up on the idea of writing Beatles infected songs and what followed is a story which deserves it own blog entry.

Here's what the liner notes for Lucky Planet had to say about The World...

Neil Innes - 25 years old, born in Essex and spent his childhood in Germany; studies classical piano for seven years until the emergence of rock 'n' roll. Fine arts degree from Goldsmith College, London University. Neil was one of the founder members  of the Bonzo Dog Band and was responsible for many of the Bonzo's compositions including the very famous "I'm The Urban Spaceman". Neil formed The World when the Bonzo's split up, and writes and produces  all the material for the world.

Dennis Cowan - 23 years old. Born in London. Took up the bass and leas guitar while still at school. Teeny Bobber Heart-Throb until joining the Bonzo Dog Band in 1967.

Ian Wallace - 23 years old. Libra (Virgin ascending). Born in Bury, Lancashire. Started his career at the age of 17 backing Little Richard. Ian has played all over Europe and Scandinavia and 1968 turned session work. He first met Neil Innes and Dennis Cowan in Spring of 1970.

Roger McKew - 27 years old. Born in London, studied piano for seven years and the cello for three years and later switched to the guitar because all his friends had one. Roger was a member of the Quiet Five and turned to session work in 1966. Like Ian Wallace, Roger first met Neil and Dennis in the spring of 1970.