Wolfe were essentially the same band John Pantry, Nick Ryan & John Richmond had been putting out killer popsike singles since the mid sixties under various aliases (Norman Conquest, The Bunch, Sounds Around, Peter & The Wolves etc).  Recorded in 1972 at IBC Studios in London where Pantry had engineered recordings for the likes of The Small Faces, Bee Gees & The Kinks to name a few.  Where as most of the British psych bands of the sixties would develop into Prog or Hard Rock, Wolfe remained pop. There is nothing remotely heavy or proggy on Wolfe and only one track exceeds 4 minutes.

The record was released only in the US by Rare Earth (a Motown subsidiary for white acts) and must have been aimed at the last remnants of the bubblegum market.  Five out of the albums twelve songs are covers of popular songs of the day and although an eclectic mix, they all fit perfectly between the Pantry/Ryan originals. 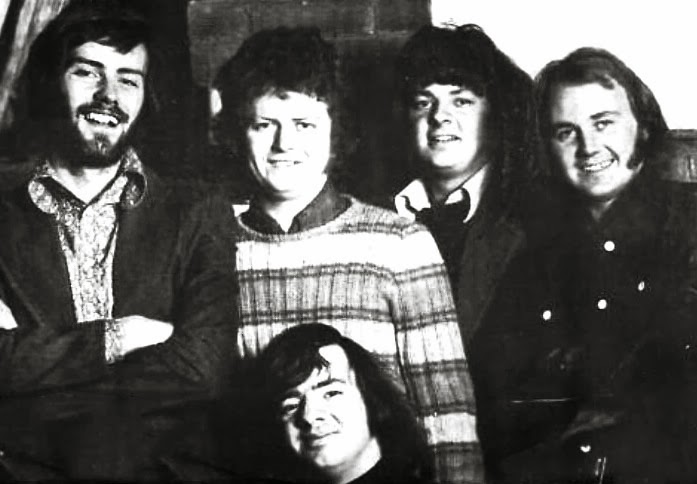 The album starts off with "Ballad of the Unloved" written by Scott English & Larry Weiss who would be most famous for penning Barry Manilow's "Mandy" and sounds rather like something off one of the first three Bee Gees albums. There is a wobbly sound effect on this track that I have never heard on any other record!  "Bite it Deep" is the highlight of the album for me.  If you can imagine "Sugar Sugar" by The Archies with biblical references in the lyrics, a killer Moog solo and hand claps a plenty then you're about there. One of my all time favourite songs and namesake of this blog!! "If the apple is sweet then bite it deep"

Hammond organ and McCartney style piano pump some life into Lesley Duncan's beautiful ballad "Love Song" and is played in a style that Pantry would continue on his debut album as a solo artist later that year.
A nice take on James Taylor's "Something in the Way She Moves" adds flute and  banjo to draw out the melody and turns it into a great pop singalong, almost gospel like in the choruses.  The version of Chinnichap's "Funny Funny" stays true to the Sweet's but with sweeter harmonies.  Makes me wonder if they attempted "Sugar Sugar" in the recording sessions!?! 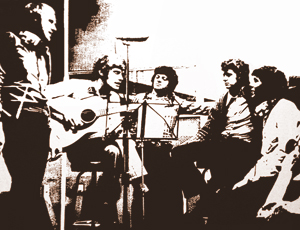 Wolfe's "Dancing in the Moonlight" opens side two and beats the King Harvest original hands down. The album version is far superior to the single version which appeared prior to the albums release. "Us" is a sweet tune which sounds like something Graham Nash could have written for the first CSN album and  Mark Wirtz penned "Mama Lion" adds some neat slide guitar parts which always makes me want to play along every time I hear it.  "Time is Money" has got a nice Hard Days Night acoustic feel to it, Pantry doing his best Robin Gibb impression halfway through and the Moog stuck on the Doctor Who setting makes another welcome appearance!  The album ends with "Song with No Name", a minute long Pantry piano ballad which had been kicking around for a few years in demo form.

Wolfe split after this album but the members worked together throughout the 70's on a few religious albums produced by John Pantry who eventually became an Anglican Minister.  Nick Ryan went on to write "Just One Cornetto".

Hudson Brothers - Totally Out Of Control (1974)

It was 2002 when I first heard The Hudson Brothers on the now defunct popfortyfive radio, one of the earlier internet radio stations.  I was laying on my bed reading a magazine and So You Are A Star came on. The song distracted me and for a second I thought I was listening to an Imagine outtake.  As the tune continued and I realised it wasn't John Lennon so I figured I better get up and look at the pc to make a note of the track.

I didn't waste any time before getting on ebay & tracking the album down.  £10 was well spent on a British demo copy of Hollywood Situation.  I was the only bidder.  At that point in time, before YouTube & blogs made practically every obscure record ever released available ebay was the only option if you didn't want to wait for your music. I was still on dial-up then so even if it was possible have downloaded the album it probably would've been quicker to arrive in the mail. 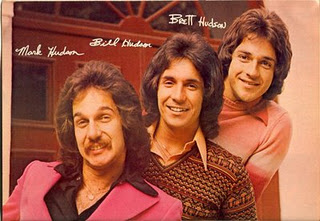 Hollywood Situation arrived and impressed me enough (apart from The Adventures of Chucky Margolis, a too long comedy sketch piece, which didn't make it onto the tape version I made for my Walkman) to want to hear everything with the Hudson's name on.
This eventually led to me owning Totally Out of Control...

Bill, Mark & Brett were on top form in 1974 releasing not one but two Beatle-esque pop masterpieces.
After Hollywood Situation (the first of the two releases of 74) the trio enlisted Elton John lyricist Bernie Taupin on production duties and came to England to record the follow up Totally Out of Control.
The LP was released on Elton's Rocket label (which also released lost classics by Stackridge and Blue, future entries of this blog) and is as close to perfect as a pop record has ever got.
The album opens with Long Long Day, a hook laden handclapathon, all pounding piano and power pop guitar. Be A Man wouldn't sound out of place on side 2 of Abbey Road with its tasteful use of Mellotron and Leslie speaker effects.  The Beatles sound is all over this record.  Dolly Day starts off as You Never Give Me Your Money and ends up as Octopuses Garden and If You Really Need Me embellishes Paul McCartney's Ram!  Straight Up and Tall and Lover Come Back to Me are reminiscent of Electric Light Orchestra in particular the Eldorado album also released in 1974. Coincidence?  The albums closing 7 minute medley demonstrates the creativity of the band and shows they weren't short of an idea or ten.

With all of these Beatles references you'd be forgiven for thinking that this may be bordering on parody album but luckily they're not putting on scouse accents but singing with their own voices, which although a little shouty & macho in places, sounds uncannily like Jeff Lynne.

1975 saw the release of Ba-Fa.  Produced again by Taupin, the songs on this LP sound very similar to its predecessor and contains the Hudson’s finest song Spinning the Wheel (With the Girl You Love).  A strong LP, but my least favourite of the Hudson Holy Trinity, still, killer by most other bands standards.  God only knows they found time to do all this and be TV stars at the same time.  They must have been knackered!

The fact that Totally Out of Control or any of the Hudson’s albums for that matter have never been reissued on CD makes me think that a deluxe remaster, reunion tour or a classic album documentary are not in the pipeline.  Shame.  Maybe they are a little embarrassed of some of their lyrics "I'm sick and tired of the LA scene, with all the faggots and drag queens" or "G.O.D. spells God, D.O.G. spells dog".

The Hudson Brothers do Beatle-esque very well and are a good starting point for fans of the post Beatle/pre Power Pop genre.  Check em out.