I first heard Phil Cordell on the first volume of the Fading Yellow compilation series. "Red Lady", for me, was the stand out track on the CD and I proceeded to play it to death. Around that time I remember being disappointed that there was no accompanying LP from this era. I've been digging a little deeper into the musical career of Phil Cordell and recently discovered the Dan The Banjo Man album, which has some really great tunes and a couple of weeks ago took a chance on a single which he recorded in 1974 for Motown's Californian sub-label, Mowest. I knew I'd be happy with my purchase because I already loved the Neil Sedaka version of "Laughter In The Rain", but the Cordell version, despite a cheesy saxophone solo (not a fave instrument of mine!) absolutely pisses all over the original. The b-side is also a winner. "If I Don't Get All The Luck" a pure pop masterpiece, reminiscent of Honeybus, in particular Colin Hare whom Cordell's vocals uncannily resemble. There's even some of that trademark slide guitar on here too. 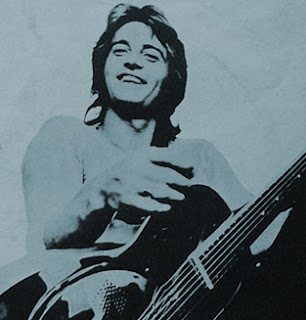 By 1974, Phil Cordell had been in the music business for over a decade. He cut his teeth playing guitar in Enfield band Steve Douglas & The Challengers around 1963 who allegedly made some recordings in Joe Meek's legendary studio as The Prophets, although none of these are known to exist. The band would evolve into Tuesday's Children and released three singles with five of the six sides written by Cordell, the most interesting being "Strange Light From The East", a song favoured by UK psych collectors which shows an early glimpse at his unique song-writing style. Cordell split from Tuesday's Children before they turned into heavy rock act Czar and released his first solo single, the aforementioned "Red Lady" in 1969. The single failed to chart and was followed by another flop record under the pseudonym of Beachcomber. "Surfin' Soul" was Cordell's first foray into guitar instrumental territory.

1971 saw another name change, this time as Springwater and the release of "I Will Return" on Polydor records, a surprising and unlikely hit record, which caught the attention of the radio stations and record buying public who sent the multi tracked slide guitar instrumental into the the UK Charts for twelve weeks, peaking at number five. The record was also a hit in Europe and made number one spot in Switzerland. A Springwater album followed, consisting of similar instrumental tracks, which I have heard and have to admit doesn't do much for me, really. A couple more singles followed on Polydor, trying but failing to repeat the success of "I Will Return".

In July 1973, a single under his own name appeared on the Mowest label. "Close To You" b/w "Londonderry", both great pop ballads also featuring the welcome return of Cordell's pleasing vocals. Shortly after in August 1973 came another surprise hit "Dan The Banjo Man", as Dan The Banjo Man for Rare Earth records, a number one hit in the German charts thanks to it being used in an advert for orange juice! It was around this time that Cordell seemed to be leading a schizophrenic music career, releasing records, successfully, in a novelty instrumental style and in another, less successful more serious singer-songwriter style and I'm sure his heart would have been in the latter, but you've got to do what you've got to do to pay the bills.

An album of songs with vocals under the name of Phil Cordell entitled "Born Again" eventually hit the record stores sometime in 1977. A very polished production and consistently good all the way through and sounding like a cross between Pilot and ELO with a hint of West Coast AOR, well worth checking out. The album can be found tagged on the end of a CD reissue of the Springwater album on the Angel Air label.

Sadly Phil Cordell passed away in 2007. His legacy lays in these ace recordings from the 1960's & 1970's. It was nice to read the comments on the YouTube videos and see how people are fond of his songs.


I've added a discography of solo Phil Cordell releases taken from various websites but put together as a complete list here for the first time. If you see any errors or anything I might have missed off, please let me know and I'll correct it. Thanks.

The Euclid Beach Band were a bit like The Beach Boys own Rutles in a way. By trying to parody our fave Californians they actually struck gold with this tune about a band wanting to impress the girls on the beach but failing to do so because of the lack of waves! It became a regional hit and was the most played record on Cleveland radio in 1978 but failed to chart nationally.

The song and resulting album is well worthy of your ear holes and will please fans of the later work by the Beach Boys. They were produced by none other than Eric Carmen, who had written his fair share of Beach Boys style songs with the Raspberries. Members of the EBB had previously backed Carmen on his first solo LP.

Here's a rare video of an old news report about the single...

Grab a shovel and dig this...

Here's a great obscure record which follows on nicely from my last post about Claggers. Most likely another studio creation by Kaplan Kaye who is credited as songwriter and producer (and it's definitely him singing) for this one off single on Dick James' Jam record label under the name of Watts.

The first few bars that kick off  "Girl You Make It Easy" will have you thinking that you're listening to some psychedelic/prog/glam hybrid thanks to some tasty synth action and eery backwards echo on the vocals, much like Umber Rag by Claggers. It quickly shifts into a killer piano pop tune, exactly the sort of sound that Macca was going for (six months later, I might add!) with Wings on the Band On The Run LP. This song won me over instantly when I heard it on the Mixed Up Minds Vol.6 and desperately had to get a copy of my own so I could write about it on this blog.

A vinyl copy of the single was easy to track down, I got mine on eBay for the bargain price of £5, which is surprising really considering that the B-side is also a great track. "Betsy Ballou" is prime power pop of the Badfinger variety. You could stick it anywhere on Magic Christian Music and it wouldn't sound out of place, and the vocals sound uncannily like Tom Evans. I've got it earmarked for the next Bite It Deep mix volume 15.

So what we have here is a killer double sider, still cheap and easy to get hold of. What are you waiting for?

Chumley's Laughing Gear by Claggers is an obscure little pop album which appears to have slipped under the radar of both the Tapestry Of Delights and Galactic Ramble, neither is it listed in the Record Collector Price Guide 2014. I bought a copy of the LP a few months back on the strength of the outstanding single "Someone" b/w "Umber Rag" (which can be heard on BID Vol.13 if you're interested).

When the record arrived in the post the first thing that struck me was the hideous and slightly euro proggish sleeve which depicts the band as Jack in the boxes, but to be fair, they probably didn't have a huge budget for artwork, or promotion for that matter hence the album bombing and being virtually ignored ever since.

It turns out that Claggers were not really a proper band but more of a studio creation of four backroom boys working for DJM records at the time and on the back of the LP under their names where you would normally see what instruments the members play you instead get their day job titles: Stuart Epps (Record Producer), Kaplan Kaye (A and R Man), Clive Franks (Chief Recording Engineer) and Jeff Titmus (Recording Engineer), smaller print indicates their musician roles as Vocalist, Pianist/Vocalist, Guitarist and Drummer respectively. They're also joined by Caleb Quaye on a few tracks and it was him who you have to thank for their dodgy name!

The album was recorded during studio downtime, unbeknownst to Dick James who one day caught the band  in the act and luckily for them, liked what he heard. Rightly so as there are some remarkably well written pop songs on the record, which unsurprisingly sounds quite like Elton John in places. "Eric Is Calling" is a dead ringer for "Bad Side Of The Moon" and that's not a bad thing! The album is not a masterpiece by any means but I'm honouring it in this blog as it seems to have been cold shouldered by collectors despite a handful of ace tunes to it's name...and here's one of them...dig!!!