In 1969, five years before claiming the UK number one chart position with the Rubettes' "Sugar Baby Love", keyboard player/vocalist Bill Hurd was fronting psych/pop band The Wake. Also in the band were, John Edmunds (vocals, lead guitar, autoharp), Chris Weeks (bass, vocals, autoharp), Tony Miles (drums, percussion). The Wake were active from 1969 to 1971, releasing six singles (one on Pye and five on Carnaby records) and an LP of, progressive pop entitled "23:59", which I've heard and would be pretty disappointed if I'd just shelled out £200 for a copy.

For me, the best recording by the Wake is their first single, "Angelina", which is a pure pop gem of bouncy McCartney-esque piano that has always reminded me of "Care Of Cell 44" by the Zombies, but without the sinister twist in the lyrics. The songwriting is credited to Mark West (aka Radio Luxembourg DJ Mark Wesley) and Keith Bonser (later of hard rock outfit, Zior), who were also trying to achieve pop success at same time under the name "Cardboard Orchestra". The B-side "So Happy", written by Hurd, is a decent enough tune with some nice hooks and a fab acoustic guitar solo. 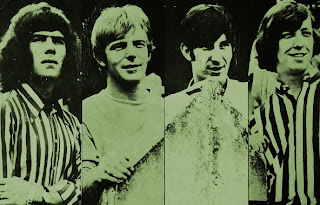 The following singles by the Wake are pleasant enough but nothing worth raving about or spending too much of your hard earned dosh on, with the exception of "Live Today Little Girl", comped on Mixed Up Minds Vol.1 and "Linda" which was featured on the Left and to the Back blog.

Early in the morning,
Jump out of bed
Look out your window,
Come on, you sleepy head
Ahhhh

When I say those little words like "I Love You"
There's a look of sunshine in my eyes
Angelina waiting for them every day
Naughty girl, your sky blue eyes are giving you away

Just a silly feeling
Etching on the ceiling

Here's a little seasonal, popsike nugget to get you in the festive spirit, which, to my disappointment did not come anywhere in ITV's, Nations Favourite Christmas Songs!

The origins of hippy pop band Mother Nature, has had collectors puzzled for many years. Presumed by many, including myself for a long time to be a European act due to the songwriting credit,"Steepy Rojo". The band were actually British and their continental sounding name is made up from the forenames of the four band members, Steve Norchi (Bass), Pete Reynolds (Drums), Rod Copping (Guitar) and Jon Reeves (Guitar).

Despite their debut single's 1971 release date, the song was written back in 1968. Both sides of the 45, produced by David Hitchcock (Mellow Candle, Genesis, Caravan) are stoned, psychedelic pop of the highest order, ultra melodic but a few years behind the times. The A-side is reminiscent of the Moody Blues in their hippy prime, armed with a pure summer of love chorus, "Orange days and purple nights, flying pastel coloured kites, and the flowers in your hair, scent the evening air". This song would have been huge had it been released in 1967.

The B-side "Where Did She Go" is even better and surprisingly, uncomped. It almost sounds like it was written purposely for a Fading Yellow compilation 40 years in the future. Despite any kind of promotion by records label, B&C, Anne Nightingale and Jimmy Young both gave the single some airplay on their shows on Radio One in the UK, but failed to secure a hit record.

An attempt to record something more contemporary for their next single, this time on the Kingdom record label, resulted in another hippy ballad "Once There Was A Time", again sounding about 4 years out of date. This time with lyrics about the effects of pollution and pesticides, "Where is the sunshine, where are the fields and the grass and the woods and the trees?". The dazed look on the four band members faces on the French single's picture sleeve makes me think they knew exactly where the grass was! The flip side "Clear Blue Sky" has an inherent Crosby, Stills & Nash influence and is the most upbeat of their four officially released songs.

There was a privately released CD compilation called "Far Over And Booby Gravy" put out back in 2003 as Steepy Rojo, which collects three of the four released songs ("Where Did She Go" is missing for some reason) as well as 15 unreleased demos, a couple of which have turned up on my Bite It Deep mixes.

Just dig that guitar sound on Where Did She Go...
Posted by Peter Gough at 00:19 1 comment:

Another ultramelodicbeatlesqueharmonypopsikeadelic (c) mix for your listening pleasure...

Edward William "Ed" Welch was primarily a composer of television and stage music in the 1970's. As a student of classical music, Welch graduated in 1965 upon which he started his music career working for United Artists Music. In 1971, UA gave Welch the chance release his own solo record entitled "Clowns". With the help of Tom Paxton, who provided all the lyrical content, Welch put out this album full of great melodic pop moments, most of which wouldn't sound out of place on a Fading Yellow compilation.

I've only ever seen the one copy of Clowns, and that is my own, which I found at the London Olympia VIP Record Fair last month. When I picked it up my eyes must have been glowing, a guy stood next to me said, "You don't want that, mate. It's not very good!". I'll be the judge on that! I'd already heard the title track a while ago and that was enough to make me hand £15 over to the dealer. At the time of writing there are a few copies for sale on Discogs priced between £20 and £30.

Thanks to Welch's classical composition knowledge, the arrangements on the LP are of the highest standard reminding me of the orchestrated cuts on Colin Blunstone's debut solo record "One Year" also from 1971.
Players on the album include Cozy Powell (listed as Cosy!) on Drums, Mike Albuquerque (Electric Light Orchestra's bass player on their first three albums) on bass, Alan Gorrie (Forever More/Average White Band)on guitar and Jo Meek, Maria Popkievitch and Frank Aiello on backing vocals.  It was produced by Mike Albuquerque and engineered by Paul Holland at Central Sound Studios, London, UK.

Judging by the scarceness of the record, you could take an educated guess that the album didn't sell too well. Welch must have realised that he wasn't destined for the pop charts, instead he used his ear for a great melody to write music for television shows and music libraries. Most UK residents over the age of 25 will definitely know at least two of TV his compositions: music from the quiz shows Blockbusters and Catchphrase!

Another record which may be of interest, penned by Welch & Paxton from 1971 is "You'd Better Believe It" by Jo Meek, who provided backing vocals on the Clowns album. Nice tune.

Anyway, back to the album and my favourite song on it, the title track "Clowns". Dig...