Gerry Morris started his music career as the bass player in The Cymbaline who's lifetime spanned the years 1965 to 69, releasing six great pop singles, none of which set the pop charts on fire, hence the lack album.  A real shame.  The Cymbaline are one of the last great British bands yet to receive the CD reissue treatment (there's got to be a CD's worth of unreleased tracks/demos etc?). I've never seen any of their singles anywhere except on ebay, and even then, they sell for big money.  My favourite single of the six is "Down By The Seaside", a great upbeat pop tune about a two week summer holiday, containing the brilliant lyric "Sit in your deckchair, looking funny in a floppy hat, use your bucket for a cricket bat, just roast like a piece of toast". Genius! Should've been a hit.

Following The Cymbaline split at the end of the sixties, Morris spent the early seventies as a songwriter/producer of various bands/projects, teaming up with producer Tony Atkins on a number of singles as Big Cherry, Boulevard, Blunderbus, Galahad and I'm sure there's more.  Check out Robin Wills' informative blog, Purepop which has covered some of these singles and are well worth hunting down if you've got the cash (...but like all of Morris' rarities, they don't come cheap!). 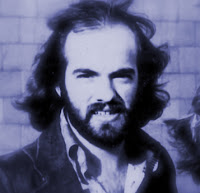 In 1973 Morris signed to the York record label who gave him the opportunity to release his first and only solo album "Only The Beginning".  Production duties were again handed over to his friend and collaborator Atkins.  I've never heard this album but I have heard a few songs and confirm that they are great.  Two of these songs "When It Come's To Love" and "See Through My Mind" have appeared on the later volumes of Jorgen Johannsen's fab Fading Yellow compilations and are of the ultra melodic, lush sounding pop type that we have come to expect from JJ's FY's!

O.k. so I've never heard the album. I do own a single though.  "Only The Beginning" b/w "Sunlover", both included on the album and both great.  "Only The Beginning" is a real heart warming tune with a neat slide guitar intro and is as good as, if not better than most of the stuff that was in the charts at the time.  B-Side "Sunlover" is a bit of a stomper sounding rather like George Harrison's "Savoy Truffle" with its stabbing brass riffs, makes me think that the album might be a bit of a mixed bad of styles.  If anyone out there has a copy of the album please get in contact an I'll upgrade this blog entry from a single to an album review!

The album didn't sell very well, hence its rarity and Morris went into production work, eventually striking gold with Amii Stewart's disco version of "Knock On Wood" before retiring from the music business shortly after.