Of all the Paul McCartney sounding singers I've heard, and I've heard quite a few,  Zuider Zee's Richard Orange wins hands down.  Even Emitt Rhodes didn't sound this close.

Hailing from Memphis and managed/produced by Leland Russell ex member of popsikers Gordian Knot (and writer of their finest tune, "Carraway Stream"), Zuider Zee put out just one albums worth of high energy power pop, funky rockers and gentle Macca style ballads.  An array of guitar tones, sound effects and some of the best use of the Moog in a pop record (check the solo in "Magic Fingers") keep each and every song on the record interesting.  There is definitely no filler on here. Overall, sounding like the missing link between Wings' "Band On The Run" and 10CC's "Deceptive Bends". 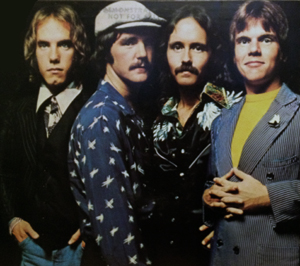 The album was released in 1975 to positive critical response but poor sales, maybe due to the fact that record label Columbia had decided not to release a single off the record despite there being more than its fair share of stand out tracks.  Had the album came out a couple of years later when the Power Pop scene was in full swing, I'm sure that the band would have been huge.

Not long after the albums release, bassist John Bonar was stabbed while fighting off thieves from stealing the band's van after a gig.  The band split shortly after the incident and Richard Orange continued writing songs, though now for other artists, his biggest hit being "Hole In My Heart" for Cyndi Lauper in 1988.  Orange eventually released his debut solo album "Big Orange Sun" in 2005.


For more info and mp3's on Zuider Zee and Richard Orange check out richardorange.info.
Posted by Unknown at 18:59 7 comments:

NRBQ are an eclectic bunch.  The albums that I have heard; the ones from the 1970's, cover a wide spectrum of musical styles from Rockabilly to Free Jazz, but it's when they play that Byrdsy/Beatlesy, power pop style that I'm most interested.

Chart wise, the band have never seen much action; their highest US position being number 70 on the Billboard chart back in 1974. Despite the lack of chart success, the band have continued to release albums and tour and have been a live favourite for many years building up a loyal following.  Apparently Macca is a fan! 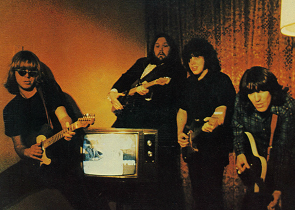 There are literally millions of Beatles cover versions out there. This is easily one of the best.

The Sweet had been paying their dues for a few years prior to this, releasing the odd killer psych single here and there.  Around the time of their debut album proper "Funny How Sweet Co-Co Can Be", the lads took to the BBC studios to tackle the Fab's "Paperback Writer". 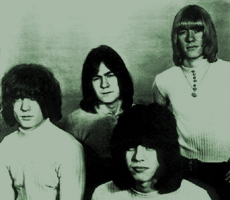 Originally aired on Brian Matthew's Top Of The Pops radio show in 1971, the energy on the track is immense. Mick Tucker's drum fills paired with Steve Priest's Bass, cranked up to eleven, elevate this already perfect tune to new heights, there is even a little Hammond organ whirling away in the background if you listen closely...and I've not even mentioned the vocal harmonies yet!!!  Most people who know this tune (me included) even prefer it to the original.  Blasphemy I know, but you can't argue with results.

The track eventually surfaced backed with the BBC version of "Chop Chop", as a Japanese only, coloured vinyl (a bootleg natch!).  I've seen it yellow, blue, orange and black wax so far. Mines grey! Pick one up while you still can.

The sleeve of the self titled Jammë LP would lead you to believe that the album was solely the work of two British brothers Keith and Don Adey.  That's was what I thought for years but the story runs a little deeper than that.

Don Adey was playing a gig with his band Churchill Downs in 1967 when he met up with fellow ex-pat Hard Times guitarist Paul Downing who were sharing the bill that night.  Downing had recently played guitar on the Mamas & Papas album "The Papas & the Mamas" when Papa John Phillips suggested Downing put a group of his own together , which he quickly did with ex British Walkers, Tim Smyser on Bass and Terry Rae (ex Palace Guard) on drums along with Don Adey on guitar. 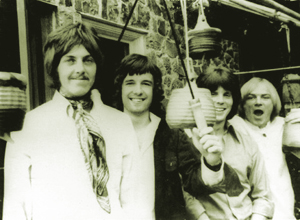 Phillips was impressed with the band and secured them a recording contract with Dunhill on the basis that he and Terry Melcher produce the album (Melcher would not last the duration following tensions between the pair).  The recording sessions took place at Phillips' own home studio/24 hour party drug den in Bel Air which allegedly saw George Harrison and Keith Richards drop by for a visit!  Phillips was going through a rough patch at the time, with the Mamas & Papas on the verge of splitting and his marriage with Michelle on the rocks. These personal problems would take it's toll on the Jammë sessions.

Terry Rae was the first to be kicked out of the band by a jealous Phillips after he'd overheard Michelle and friend Mia Farrow, tripping on acid at the time, promise to take Rae on a trip to France.  The drums were taken over by ex Them, Dave Tuffrey, then Jim Gordon (Derek & the Dominoes) and finally Jerry Allison (the Crickets).  Phillips then turned on Smyser and getting Downing to do the dirty work of kicking the bass player out of the band, which was done with much hesitation.  Bass duties were handed over to the Wrecking Crew's Larry Knechtel and then eventually Don Adey's sibling Keith whose contributions on the album stretched as far as a few vocal harmonies and bass on two tracks!  The two brothers were only surviving members by the time the recording was finished nine months later, hence them being the only two on the cover. 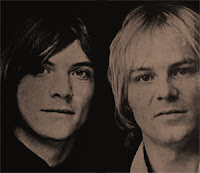 The record was released in 1970 and bombed, most probably due to it sounding years out of step with the current music scene at the time.  It also got a UK release where it died a similar death.

Surprisingly, despite the chaotic recording sessions the resulting album comes across as a sweet collection of popsike nuggets with a similar vibe to the (equally chaotic) Left Banke or Rubber Soul period Beatles complete with nasally Lennonesque vocals.  Personal highlights include the Merry Go Round-alike "She Sits There" and the lyrics on "Strawberry Jam Man", "would you like to sail a boat, way out on the sea? would you like an ice cream float or a cup of tea?"

Chaos were a UK band who released just two singles between 1973 & 1975.  First single "Down At The Club" is a Glam Rock stomper with what sounds like Noddy Holder's kid brother on vocals.  Released on Polydor in 1973, it received a lot of airplay at the time on Radio 1 and Radio Luxembourg and the band even managed to get an appearance on Top Of The Pops but the single only managed to reach number 49 in the UK pop charts.  B-Side "You Could Be My Girl" is the killer side though.  A rocking power pop number that the Raspberries would have been proud of.  The brilliantly chauvinist chorus "If you'll do what I'm asking, you can be my girl.  If you'll do what I'm wanting you to, you can be my girl" would never be allowed nowadays and I'm surprised they even got away with it back then...still, I won't let a duff lyric get in the way an ace tune.

Both sides were written by Martin Rushent (an English producer known for his work with the Buzzcocks, Stranglers & Human League).  Rushent also co-produced the single with John Bromley, a superb songwriter working for Polydor at the time.  Bromley's own 1969 Popsike album "Sing" is another lost pop gem and will eventually be reviewed on here. The pair also worked on another Polydor single at the same time for a Glam/Rockabilly band called Tank.

The second Chaos single arrived in 1975 and was produced again by Rushent.  I've never came across a British copy and am assuming that it was only released in Germany on the Bellaphon label.  Both sides of the single credit Malestroem as songwriter but song wise, not much has changed. "Guitar Man" is  100mph glam boogie with a frantic tambourine bashing away through the chorus of "Give me more, more, more Mr Guitar Man".  The B-side "Dance, Dance, Dance" is a power pop gem that sounds more like early Bangles than Slade, with its sped up vocals.
The picture sleeve of the single shows a man (the lead singer presumably) wearing a fine, oversized Noddy style top hat.  No mirrors though!

Red Herring was ex Honeybus member Pete Dello, who decided to leave right after their most successful release "I Can't Let Maggie Go" found its way to Number 8 in the UK pop chart in 1968. 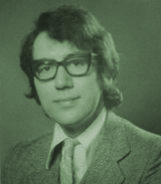 Following his departure from Honeybus, Dello released his first of three issues of "I'm A Gambler" b/w "Go Away" under the moniker Lace for Page One records in 1968 and "Taking The Heart Out of Love" b/w "Uptight Basil" on Penny Farthing records in 1969 before releasing his only solo LP "Into Your Ears" under his own name on the Vertigo subsidiary label Nepentha in 1971.

Around this time Honeybus reformed and were signed to Warner Brothers.  An albums worth of material was recorded but never released.  A test pressing of the album, "Recital" surfaced in 2007 on ebay and fetched £466.  A pleasant enough record full of light pop tunes but doesn't qualify for the KILLER tag unlike it's predecessor, 1970's "Story".

"I'm A Gambler" was released again in 1973 on the independant label GM. The B-Side "Working Class Man" is just as good, if not better than anything on "Into Your Ears".  Quite like Macca at his most whimsical, it has a distinctively "When I'm Sixty Four" feel to it.  The Lyrics are sang with the least convincing working class accent I've ever heard and is clearly a piss take but still, a great tune and probably the best 30p I've ever spent!  Around the time of this release Dello produced a single for American singer Leah.  Both sides were cover versions taken from the Dello songbook ("Arise Sir Henry" & "Uptight Basil").  I've heard neither so can't pass judgement!

"I'm A Gambler" was released one last time in 1976 on Arista backed with "Tattered Robe", another fine Dello original, recalling Honeybus at their best. 1976 also saw the re-release of "I Can't Let Maggie Go" following is use on the popular UK television Nimble bread advert. Pete Dello quit the music business soon after.