Nederbeat band Smyle were formed in 1971 by singer/guitarist Bas Muys and included brothers Peter and Paul Van Der Vossen on bass and drums, respectively and Mark Boon on lead guitar.  The band recorded a number of demos in the Van Der Vossen's home in Leidschendam and were sent to record labels but none of them showed an interest until.  Eventually, a demo tape ended up in ex Golden Earring drummer, Jaap Eggermont's possesion who immediately loved it.  At the time Eggermont was producing bands like Sandy Coast, Earth & Fire and Greenfield & Cook and used his infulence at Polydor to secure Smyle the deal they had been struggling to get.

1972 saw the release of Smyle's debut single I'ts Gonna Be Alright. Written by Eggemont's old band mate George Kooymans the song was the first of Smyle's trademark Beatlesque style utilising Bas Muys' Lennon-esque vocals.  In fact the song sounded so much like the Fabs that in 1983 it appeared on the bootleg LP "...One, Two, Three, Four!" trying to pass itself off as a genuine Beatles rarity!  The single's B-side was She Means A Lot To Me, which, sticking on the Beatle tip, sounded just like George Harrison circa 1965. So, Polydor  in all their wisdom, house the single in a plain white sleeve with only the band's logo (a smiley face!) to fool the public into thinking that....the Beatles are back!! A similar trick would be used to much greater effect a few years later by Klaatu.  Whether or not the record buying public believed that it was the Beatles or not, they bought enough copies to send it to number 9 (...number 9!) in the Dutch pop chart. 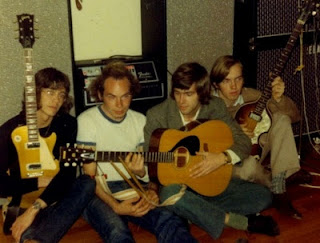 Follow up single The Tandem b/w I'm So Heavy appeared the following year,  with both sides written by Muys and again, sounding as much like The Beatles as is humanly possible. This time Polydor decided to stick a picture of the band on the sleeve, exposing them as four long haired lads in matching white denim outfits. The single made it to number 12 and would be the last time Smyle would ever reach the top 40. A promotional video was made for the single and you see the band singing The Tandem and riding various weird and wonderful bicycles.

The next single released was Dream With Me, a McCartney style piano ballad complete with brass section and came backed with Have I Ever Let You Down, balancing out the A-side with a Cavern style stomper. A great couple of tunes but failed to make any waves as did the next single Crazy Lazy Little Miss Daisy, which sounds similar to "It's Gonna Be Alright" and just as infectious.


Polydor decided not to give Smyle a chance to record an album after the chart failure of the last two singles which is a real shame because all eight of the songs that the band recorded are winners in my opinion.  The band folded shortly after the final single.  Mark Boon went on to play in many bands and finally found success in Diesel ("Sausalito Summernight") and Bas Muys went on to sing John Lennon's parts on the Stars On 45 Beatles Medley in 1981 which reached the top of the charts in many countries including the U.S.  Muys was then given the opportunity to release a solo single, "Oh Terry" (would love to hear this if anyone out there has a copy) on the back of this success but would have to wait until 1990 to release his solo album, Lennon & McCartney Secret Songs, his own take on the songs the Beatles gave away to other artists.


In 2009 all four original members of Smyle were reunited for a one off performance at the Utrecht Record Fair.  The footage is available on YouTube and show the band having a whale of a time.  Good on 'em!