Like most record nerds, whenever I hear a good record, a really good record, I immediately have to know as much information about the artist as I can. Mainly I want to know if they've made any other good records. A bit of googling and a search around YouTube is usually enough to satisfy my curiosity. Occasionally I find out absolutely zilch about the artist and this is one of those occasions.

Psych collectors might recognise the name John Winfields from his French only 1971 single, a killer double sider on Decca Records, "You Know, You Go" b/w "Whisper Who Dares", both absolute belters which you'd be forgiven for thinking they were from 1967 and British. It's always reminded me of the style of songs that George Harrison was writing around 66/67, very bendy, orchestrated pop with unusual melodies and mysterious lyrics. Neither sides were written by Winfields, instead by someone called Al Martin (zilch again!). I had a little theory that Winfields may have been from the UK due to the spelling of his forename (John not Jean) but you can pick up a little accent in "Whisper Who Dares" so for now we'll just assume he was French.

Recently, I found out that John Winfields released a follow up single for Decca in 1972. The much harder to come by "Look At Nature" b/w "Vera" found its way into my letterbox via some French website selling run of the mill singles (for very cheap). I know it sounds sad but I get genuinely excited when the postman delivers me such goodies. I think it's the possibility that you're entering unknown territory and that your expectations may be choked within five seconds of the needle touching the groove! Luckily for me, I'm quite open minded with music and where most people wouldn't give a Gilbert O'Sullivan-esque record more than a couple seconds on their turntable, I'll give it ten plays in a row and stick it on my pile of records to write about on this blog! That's what happened with this record. It's not a record that will be setting any mod/psych dancefloors alight but it will definitely please the fans of obscure Beatlesque pop.

The a-side "Look At Nature" is a successful attempt at a solo John Lennon style piano/orchestrated pop tune. "Look at nature, look at the sky, look at the sun, how old is the wonderful world?" not quite as thought provoking as "Imagine" but with a nice tune carrying it along you can forgive such hippy dippy lyrics. On the flip side is "Vera", written again by Al Martin, an upbeat piano pop song, sounding very much like "Doubleback Alley" by the Rutles and a perfect example of the kind of music on this blog. The single also comes in a picture sleeve, showing Winfields to be about 19 years old and clearly intoxicated. Who was John Winfields? Where did he come from? Where did he go? Answers please...

Monkberry Moon Delight is one of the best Paul McCartney album tracks and why he never chose to release it as a single is anyone's guess. Norman "Hurricane" Smith, recognised the potential in the song, recording and producing it for himself in 1971 shortly after the release of Macca's Ram LP. Smith used the pseudonym Curtiss Mason for the single release which is strange due to the fact that he was getting some pretty decent chart action under the Hurricane handle. The public weren't interested in neither Curtiss Mason nor his solo Beatle cover, thus leaving behind a killer version of what should have been a hit. Maybe Smith figured his raw vocal performance might have startled his granny devotees.
The b-side to this single, "Lot Of Lovin'" is a decent rocking tune, written by Wally Allen (aka Wally Waller), bass player from the Pretty Things. Allen also appears to providing the vocals on this song. You may be thinking what an odd couple a Pretty Thing and Hurricane Smith would make, but don't forget that Smith produced the Pretty's defining moment and UK psych classic SF Sorrow. There's no other reference on the world wide web of "Lot Of Lovin'" having any connection to the Pretty Things so I may have just made my first revelation. Most probably no one gives a toss!

Take it away Norm...

I hope nobody minds if I give my own band a little plug on here today. This blog usually focuses on music from the late sixties and early seventies, but just for today we're coming right up to date with the release of The Junipers' Euphonious Trolley EP Volume One. The plan is to release the more poppy songs in EP form between albums. This is our first one and features four of our catchiest songs with an emphasis on Beach Boys/Beatles inspired pop. If the music featured on this blog is your bag then you should go and give it a listen. Available from today as a download only. Thanks! 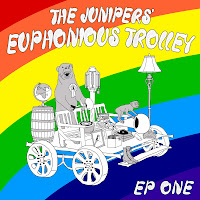 Track Listing:
And in My Dreams
Oh Gilbert (I Need Help)
Our Budgerigar (Is Addicted to Rasmalai)
Jenny Won't Ride the Roller Coaster
Posted by Unknown at 00:00 No comments:

Has it really been two years already?

Thanks to everyone who follows, leaves comments and reads this blog. Just like last year, here's a mix, compiling all of the featured songs from the last twelve months. A 90 minute collection of forgotten pop gems. I hope you like.

Bite It Deep 2nd Birthday Mix by Bite It Deep on Mixcloud
Posted by Unknown at 22:23 No comments:

Since finding out about this album about three years ago, I have been totally obsessed with getting my hands on a copy. Valued at £12 in the Record Collector Price Guide (good luck finding one for this price!) but regularly selling for three figures on eBay it is not a record that turns up very often and when it does, everyone it seems are fighting over it. After many disappointments being outbid over the last few years I finally got my very own copy. I literally jumped up and punched the air (very sad, I know), then I got a little nervous that it may not live up the expectations I had been building up for so long.

Neil Harrison if you didn't know, played John Lennon for 32 years in the Bootleg Beatles whom he now manages and are said by many to be the greatest Beatles tribute act. What is less know about Neil is that he released an album of his own material, years before in 1974 on Deram records. Here's the blurb from the LP insert, which sheds a lot of light on to what he was doing up to the point of the album's release...

"Neil Harrison is a talented singer/songwriter, he writes simple and unpretentious songs and sings them in an equally honest manner.

Neil was born in December 1950 in West Kirby, Cheshire. His mother is a pianist at a dancing school, his father an accountant.

His educational years were spent at St. Bede's Boarding School, Cumberland where he obtained ten 'O' Levels, three 'A' Levels and a place at Liverpool University to read zoology. University life lasted two days for Neil, he realised very quickly he was not a zoologist.

His musical talents which had become his main interest, had been born during his school days. During holiday periods he taught himself to play acoustic guitar with Bert Wheedon's "Play In A Day" guitar tutor. He began to become frustrated by trying to express himself through the only medium he knew and loved - music.

After leaving university he worked at odd jobs and at the same time developed a songwriting relationship with Neil Alford. They wrote and sang songs together in and around Liverpool. Known as Driftwood they produced some demo tapes which they sent round to all the major record companies. Decca
stepped in and sent producer Pete Swetenham to Liverpool to see Driftwood, they were subsequently brought to London to make an album make an album which, unfortunately passed completely unnoticed by the public. Neil Harrison's frustration continued.

Neil remained in London, living and working as a van driver. The failure of his album had dampened his confidence considerably. He began to examine himself and the people around him, wanting to know how and why they behaved in certain ways and patterns.

He became interested in social interactions and relationships between people and what these things are based upon. Neil recorded his questions, answers and observations in his songs. His luck changed and once again after making a series of demo tapes Neil was signed to a publishing contract with Southern Music, who financed an album which, although not made available to the general public did bring Neil back to the attention of Decca, via producer Keith Whiting.

Neil's confidence has been restored, his honest unpretentious songs are to be released on the Deram label, on an album called 'ALL DRESSED UP AND NOWHERE TO GO' His view of the world and what he's learnt about people whilst living, struggling and growing up has been recorded as a sincere down to earth expression.

He is still extremely interested in sociology and is in fact taking an external degree in the subject at London University. If Neil's album is anything to go on, he should pass his finals with flying colours."

The album is didn't sell well, hence it's rarity and hence the fact that hardly anyone has heard of it. It would have made a nice addition to the recent edition of Shindig! magazine which highlights Beatleisms (how the fab four cast a shadow over the 1970's), a theme which runs throughout this blog.

The album sleeve sees Harrison already looking like Lennon circa 1967 with his little round spectacles and moustache. Musically, it sounds closer to Paul McCartney's mellower moments his first two solo albums and the Wings Wild Life LP than Lennon and vocally resembles George Harrison especially on "This Is London" which is a dead ringer for "Savoy Truffle". Lucky for Neil nobody heard it otherwise he'd have ended up in court with his namesake.

On the whole the album is a grand affair with plenty of orchestration and epic Beatlesque moments, some killer pedal steel provided by the dependable B.J. Cole and some tasteful splashes of Moog throughout the forty minutes of sophisticated singer/songwriter pop. For me, the stand out songs on the album are "I Need A Friend Like You", the most obvious Beatles-y, "Crisis Point", the most Abbey Road-y and "Sad Eyes", the most McCartney-y and the one that Decca fancied Harrison's chances with, releasing it as a single backed with "Bicycle Driver" in 1974. I've got another single from 1974 on Deram records "Eyes In The Back Of My Head" b/w "The Busker" which is pretty good also but not on par with the LP. Another single exists from 1972 on Spark records "Maybe I'm Lost Without You" b/w "I Get This Feeling With You", which I've not heard.

Has anybody out there got a copy of the Driftwood LP they would like to sell or share? I'd love to hear it!